"When once you have tasted flight; you will walk the earth, forever more, with your eyes turned skyward. For there you have been, and there you long to return."
Leonardo da Vinci, 1452-1519

I joined Vejle Svæveflyveklub in late 1998 and am now learning to fly a sailplane. I originally contacted Kolding Flyveklub, another local soaring club, and was offered a trial membership. I drove out and had a talk with them and could have gotten my first ride in a sailplane right then, but I had to decline, as my family was waiting for me. Later that afternoon I decided to check out Vejle Svæveflyveklub as well and was soon sitting 300 meters above the ground. My first flight only lasted 5 minutes, but who cares - I was hooked as a child - just never realized it.
Initial schooling at our club is done in a Bergfalke III (click to view), which has more than 5500 hours in the air and over 33,000 starts. After soloing, we move on to a Schleicher Ka-8b and, when we have gained experience, from there on to our 'glass' planes, an ASK-21 and two Grob Astir CS.
So far, learning to fly has been fairly easy. At one time it seemed like I was passing a new norm with every flying day. I went solo on June 16th, was recommended for a S-certificate on August 1st and got my temporary (local) flying permit on August 13th. I passed the test for my certificate on September 28th, 1999 - Yahoooo !!!!. 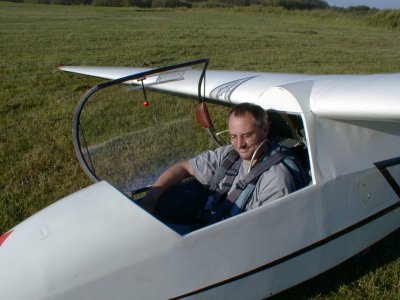 About to fly the Ka-8 for the first time

Getting winched to 350 m and then taking the plane to 2000 m, or more, on nothing but solar power, is exhilarating. The view from that height is fantastic, even if it can be a bit cold at times. One particular day, after half an hour of doing gymnastics at 1800 m, my instructor for the day started complaining about the cold and wanted to get down so he could get warm again. After sideslipping for several hundred meters we got tired of the draught and put out full airbrakes instead and pointed the nose down. When we reached 450 m, we tried to fly somewhat more normal, but kept going from one area with +3½ m thermals to another, until I finally put out the airbrakes again. What a day !.
Being a student pilot has its benefits - like watching the faces some of the know-all old-timers when you tell them that you actually climbed higher than they and stayed up longer, after they have criticized your style of flying.

There are some downsides to flying as well. One particular day, I had been thermaling in the same area outside the local TMA for quite some time, when a Boeing from "Braatens (un)Safe" performed it's usual brain-dead stunt of plowing right through the area, which is usually thick with gliders. We have had problems with flights from that particular airline several times in the past, but this time was worse than usual, as the plane passed directly below my position, hardly more than 100 m lower. Not quite so amusing, to say the least, and shows a blatant disregard for the safety of their passengers and others. Not only was I well clear of the clouds, but there were several witnesses to the fact, so I'm looking forward to seeing the incident report.

With all the interesting projects available, I naturally had some trouble deciding on a project, before I decided on a course of action. At the moment I'm contemplating building a FP-606, a low-cost UL, in order to gain some experience, but I hope to be able to start construction of a Jodel D18 soon after that. I would actually prefer to build a glider, but all of the available planes either have inferior flight characteristics or are not available as plans, so I am still trying to find suitable plans. In the process I am putting together a page with the information on available glider kits and plans. Any and all suggestions are most welcome.

I have found a plane, that I definitely want to construct, a replica of the German WW2 scout plane, the Fieseler Storch, which has some pretty amazing flight characteristics. However, the available constructions are all tube and fabric constructions, so I'd have to be a certified aircraft welder in order to build one (Danish regulations). The only alternative, is designing my own replica, so my preferred reading at the moment is aircraft construction. In the mean time, I'll learn the necessary skills by building something else.

If you want to build your own aircraft, I suggest you get in contact with the EAA (Experimental Aircraft Association), who will point you to the nearest chapter.

In Danmark, you have to work through  KZ & Veteranfly Klubben, which can be somewhat exasperating at times. One of the first obstacles I ran into, apart from the welding, was the fact that they require you to take courses on airplane construction, which is a great idea if you ask me - except for one thing: They are not prepared to offer the required courses on a regular schedule, but tops once a year and then only if they have full house. At long last, the wood working course was held in January 2001. Bear in mind that I decided on the project early in 1998. Well, my workshop (4 m) needs to be expanded to make room for the wing spar (7.5 m) and I will need to insulate it a bit more, as I must be able to heat it in order to get it approved. Makes sense, when you think about it - especially as the winter traditionally is the season for building.

All the red tape about construction might lead one into wanting an ultralight, which is indeed what I have contemplated doing - if only the plans for the RW6 UL weren't so lousy. In Danmark, supervision of UL-construction is done by Dansk UltraLet Flyver Union, DULFU.

I'm constantly scanning the skies for information about or links to pages about the Fieseler Storch or Jodels. Drop me a mail, if you have any information on those planes.

Did you know, that the propeller just is a big fan in the front of the plane to keep the pilot cool. Want proof? Make it stop; then watch the pilot break out into a sweat.